In this post, I discuss an ancient medicine wheel in the Bighorns! There is a prehistoric Medicine Wheel hidden in the northern, Bighorn mountains.  It was built by the ancient ancestors of today’s American Indian tribes.  More than 80 tribes claim the wheel in their oral traditions so it can’t be attributed to any one group or culture, though it’s, obviously, a very sacred site.

This is one of the largest, stone medicine wheels in North America (there are at least 150 spread throughout the continent).  It’s constructed with a center cairn with spokes emanating from it to an outer circle that connects six, smaller cairns that appear to be strategically placed.

Archeologists aren’t sure of the wheel’s exact age, most estimates date it back at least 800 years, but it could be far older.  Archaeological evidence shows human habitation as far back as 12,000 years in this area!

The ranger we spoke with stated the six rock cairns that dot the outer portion of the circle are believed to have a celestial purpose, but the exact function remains a mystery–it is thought that they may have been used during vision quests.  The last time the six cairns matched up with celestial markers was at least as far back as the 1700s!

Religious ceremonies are still held at the wheel on a regular basis as many tribal members make religious pilgrimages to the site.  Some of the ceremonies involve large groups, while others include only a few individuals–two, small, private ceremonies occurred while we were there.  Anyone with American Indian heritage can participate in a ceremony.

It’s always enthralling for me to observe religious practices that I’m not familiar with.  I’m fascinated by the emotions you see play out on the faces of the participants, and how descriptive their movements can be.  I find their actions evoke emotions within me as well.  You can actually feel the peace and tranquility emanating from them as they dance, pray, or worship in their own way.

A tour of the wheel may be delayed if a ceremony is occurring, though they usually don’t last longer than 30 minutes, so please be patient and respectful during this time of worship.  Numerous religious offerings are tied to the fence that rings the site (or are placed within the wheel itself).  Please do not touch or photograph these items directly as they are sacred.  It is also requested that people not take photos or videos of the ceremonies, as they are occurring, to respect the privacy of the participants.

Where is the Bighorn Medicine Wheel?

The wheel is located on Forest Road 12, off of US 14A, in the northern part of the Bighorns.  It’s about 20 miles from Burgess Junction (where 14A branches off from US 14 to the east) and about 30 miles from Lovell, Wyoming, to the west.

The parking lot is a mile-and-a-half walk from the wheel on a graded, dirt road.  The hike isn’t bad, though it is uphill both ways (seriously 😝) and the altitude is over 9,000 feet, so take your time.  The site is also above tree line so bring a hat, water, and sunscreen, and be prepared for the ever-present, Wyoming wind.  It usually takes an hour or so to complete the entire route.  The site is free to visit, though donations are appreciated.  Because this is a sacred site, pets are not permitted and must be left in the parking area.

The only thing that marred the experience was the large, FAA radar placed on the adjoining peak (because none of the numerous, other peaks in the surrounding area, that were a little farther away, wouldn’t have worked?  REALLY?!)  Federal Government, do better! 😤

The Backroads of Wyoming

I’ve suggested before, to always take the scenic route, when time permits.  We enjoyed a good bit of that on this trip!  We started by taking Route 24, west, from where it branches off near the Island Park campground.  We then took Forest Road 408, to BLM Road 1117, on to Hyattville.

This route is listed in the gazetteer as being Hyattville Road, but we saw NO signs reflecting this.  Similar to what we’ve found in Colorado, even though a road may be listed as a “major connector”, especially in the gazetteer, this could easily mean the road is actually dirt (sometimes wide and graded, other times little more than a narrow, two-track, high-clearance road that I wouldn’t be comfortable taking an Outback on). 😝

We used three separate maps–the gazetteer, a Bighorns map we picked up at a local, outdoor store, and a road atlas–to gather a–somewhat accurate–estimate of the roads’ actual conditions.  Part of the difficulty was the roads traversed National Forest and BLM land in this area, and each department names and maintains their roads differently.

The drive was very manageable with Mr. Trekker’s Tacoma (any high-clearance, 4WD vehicle could handle it in good conditions).  There were no steep drop-offs and no, real, technical obstacles like what we’ve encountered on some of the roads in Colorado.  It was also beautiful, ranging from alpine, spruce forests and aspen groves, to dun-colored high prairies dotted with tan and red clay mounds, adorned with the varying greens of the diverse foliage.  Rock-rimmed canyons with their gaping mouths open onto prairie grasses far below, while rocky cliffs of various colors traverse throughout, all with the imposing Bighorns as a backdrop.

Here is a video I made that showcases the beauty that is eastern Wyoming.

After leaving the Medicine Wheel, we decided we were game to try a few more back roads.  We took another scenic trip, east, on US 14A to Burgess Junction, where we picked up US 14 and took it west.  We took that road to Route 17, another “major connector”, that we then took to Alkali Road/BLM Road 1111/Route 228, back to Hyattville (this is a back way to reach the Medicine Wheel from the south).

Again, these road numbers and names were listed on the gazetteer and one of the maps–some of these roads didn’t even appear on the Atlas–but were NOT shown on the actual road.  We just trusted the signs that directed us back to Hyattville.  You always need to be flexible when taking back roads, as you never know what kind of obstacles or conditions may cross your path.  I should also note, there was NO cell coverage in this remote location (and GPS can often be inaccurate), so maps are often times your only option–time to go “old school” folks!

Another road we could have driven was labeled in the Gazetteer as the “Red Gulch, Alkali National Back Country Byway”.  We didn’t actually drive it this time–though we returned at a later date to check out the fossilized dinosaur footprints it leads to! 😯

The Back Country Byway is more of a two-track, high-clearance path, at least in spots.  I certainly wouldn’t call it a “main road”.  Funnily enough, the roads we took back to Hyattville ended up being in better shape than the back road we brought out from the campground.  They were graded, gravel roads that one could expect to travel 30 – 40 mph on (if the rancher in front of us hadn’t decided a slower speed was better.  Unfortunately, on those roads, that are only about 1.5 lanes wide, passing really isn’t an option unless the person in front of you is feeling charitable and pulls over.  This man didn’t. 😜)  So, we enjoyed a leisurely, scenic stroll through the beautiful Wyoming countryside.  😁

After reaching Hyattville we took Route R54 (another graded, well-maintained, gravel road) to Ten Sleep and then got to enjoy the, INCREDIBLY beautiful, US 16 east through Ten Sleep Canyon, back to our campground. (Did I mention, almost all of these roads, despite their varying conditions–with the exception of the highways–had the EXACT SAME indicators on the map? 😜)

The topography of Wyoming is very unique.  It’s characterized by the towering Bighorns in the northeast, to the Grand Tetons that criss-cross Yellowstone and the Rockies, in the west.  A drier, large, bluff-filled basin sits between Yellowstone and the Bighorns.

Some parts of the state are prettier than others–while the dry, scrubland that surrounds the mountains can be pretty and green in spring, it usually turns rather drab in the later months.  The basin area is dotted with oil fields and sketchy-looking, government sites with warning signs plastered on the fences, which can be rather intimidating. 😳

Below are some more pics of our scenic drive: 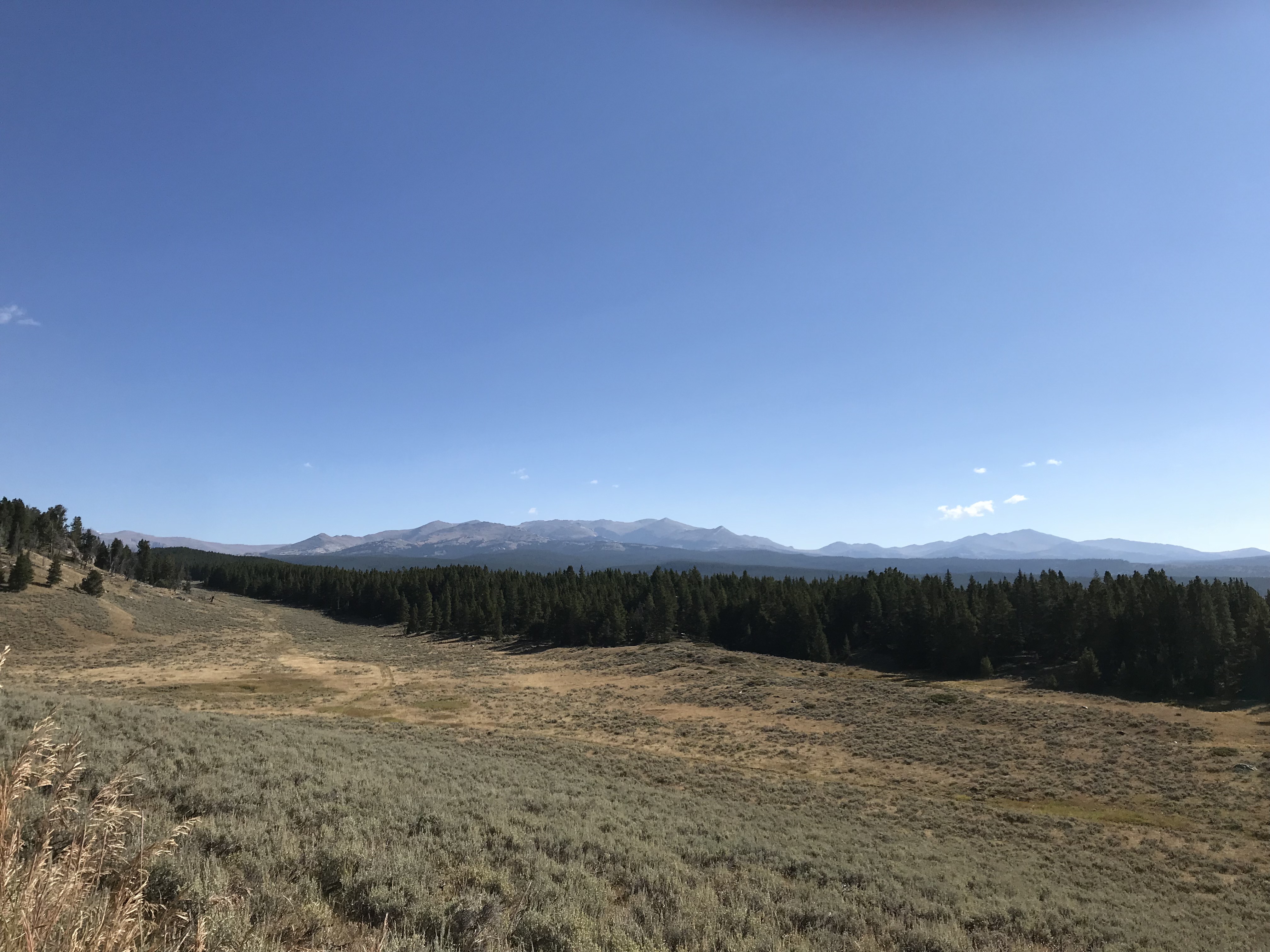 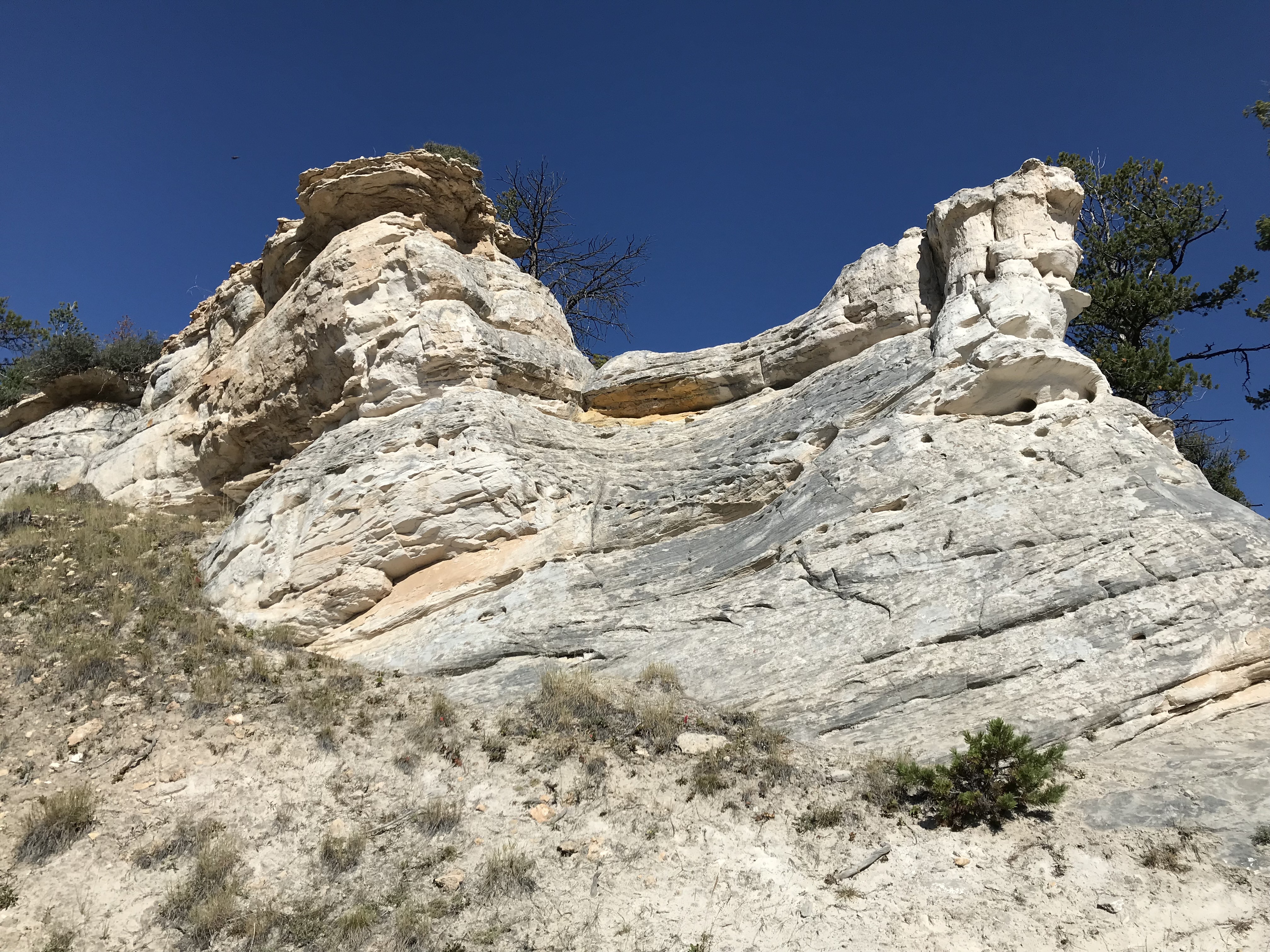 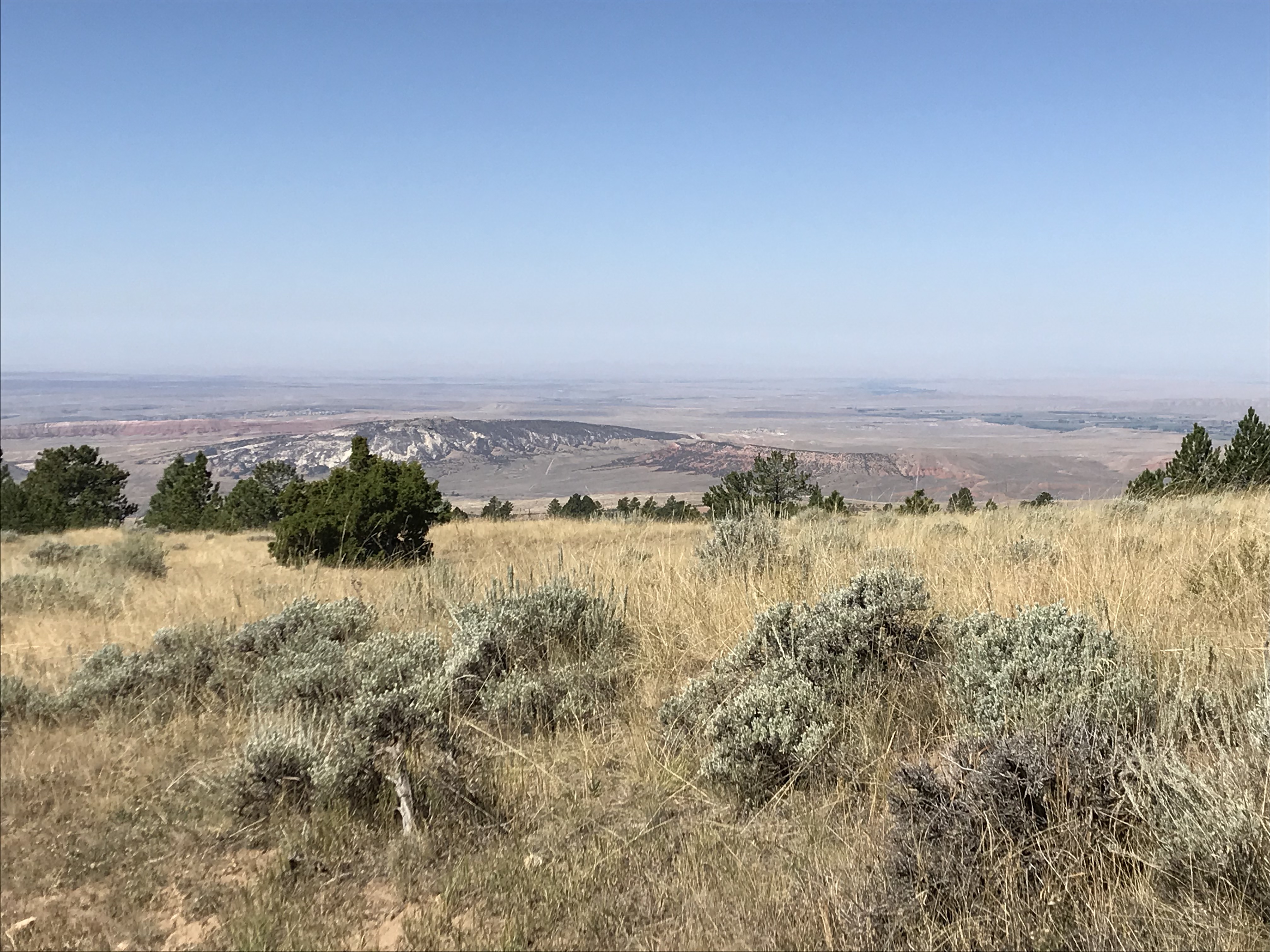 MOOSE in the Bighorn Mountains!

Earlier that summer, we spent ten days in the Colorado high country during peak season and we didn’t see one moose.  Later that fall, we spent ten seconds in the Bighorn mountains of Wyoming (literally), and TWO moose were waiting to greet us when we arrived at our campsite!  Bighorns for the win!

As I’ve mentioned previously, I’m always surprised at how much this part of Wyoming reminds me of the Colorado mountains.  The scenery and critters are very similar, with the added benefit of being half as long a distance from the Black Hills and FAR less crowded than Colorado. 😉

If you’re looking for an amazing, historical site to visit in the Bighorn Mountains of Wyoming, check out the Bighorn Medicine Wheel!

Have you ever visited the prehistoric Medicine Wheel in the Bighorns?  Tell me about it in the comments!